This is the raw source file and needs to be edited, verified, and reformatted. See: Editing a JazzSkool Page for instructions. Visit Raw Pages for more that need doing!

Howard McGhee (March 6, 1918, Tulsa, Oklahoma – July 17, 1987, New York City) made his debut during the Swing Era but made the transition to BeBop. He took part in the woodshedding sessions at Minton’s Playhouse, along with other great jazz trumpeters of the era like Dizzy Gillespie, Fats Navarro and Idrees Sulieman, though his contributions have been overlooked to some extent by critics, possibly because he spent time away from the New York scene out in California, and his problems with substance abuse had a greater impact on his career.

At the top of his game, though, Howard McGhee was known for lightning-fast fingers and very high notes.

What is generally not known is the influence that he had on younger hard bop trumpeters, together with Navarro, for many years after the height of his career.

There is more to see on Howard McGhee's Discography, so check it out by visiting Category:Discography - McGhee, Howard.

Howard McGhee crossed from the Swing Era to become one of the top trumpet players,composers, arrangers and leaders in BeBop. Click on the graphic above to see a list of his recordings as a band leader.

Howard McGhee was born in Tulsa, Oklahoma, but he was raised in Detroit, Michigan. He originally played clarinet and tenor saxophone, not taking up trumpet until he was 17.

McGhee began his professional career working in territory bands, until he signed up with Lionel Hampton in 1941.

He had brief stints with Georgie Auld and Count Basie in 1944 before traveling to California with Coleman Hawkins in 1945.The Hawkins band's concise recordings of swing-to-bop transitional music, including songs like "Stuffy," "Rifftide," and "Hollywood Stampede") are classic. 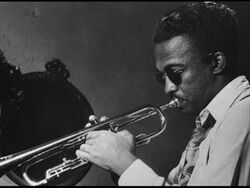 It was in California that McGhee was in a club listening to the radio when he first heard Charlie Parker play BeBop jazz. The sound captivated him, he became one of the early adopters of the new style, much to the disapproval of older jazz musicians like Kid Ory.

From 1945 to 1949, Howard McGhee was one of the finest trumpeters in jazz, an exciting performer with a sound of his own, who among the young bop players, ranked at the top with Dizzy Gillespie and Fats Navarro. He was called the "missing link" between Roy Eldridge and Navarro.

He appeared with Lester Young on his Aladdin recordings and in 1946 on some record sessions for a new label Dial were organized in Hollywood with Parker. 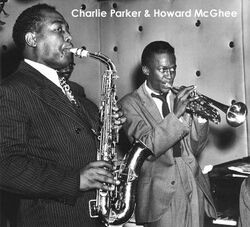 However, Parker was struggling with his addictions and the tougher control of Heroin in Los Angeles made it harder for him to fix. He fainted at the end of "Be-Bop"and was rushed to Camarillo State Hospital, a psychiatric hospital an hour north of Los Angeles, where he was admitted and spent the six months.

McGhee stayed in California into 1947, playing with Jazz at the Philharmonic. Parker returned from Camarillo to recording. A new session was organized on February 26, 1947, also for the Dial label.

McGhee continued to work as a sideman for Parker after Bird got out of Camarillo. He played on titles like "Relaxin at Camarillo", "Cheers", "Carvin the Bird" and "Stupendous". McGhee composed the last three of these tracks.

McGhee began leading groups in 1945, but by 1947 he had established a rep as a leader himself with the Howard McGhee Combo. His Dial sessions were among the most exciting recordings of his career.

McGhee played live with Parker in a club in LA in March of the same year. His stay in California was cut short because of racial prejudice. It became particularly vicious towards McGhee, who was part of a mixed race couple at the time.[citation needed] 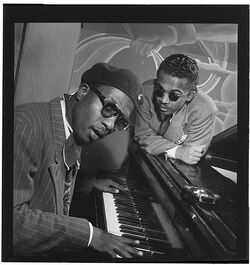 McGhee moved back to New York in 1947, participating in the fabled bop sessions at Minton's Playhouse and Monroe's Uptown House, where he worked with the biggest names in bop, including the great Thelonious Monk.

In 1948, he recorded for Savoy, and had a historic meeting on a recording with Fats Navarro on the Blue Note label.

That year he appeared on his own album, "Howard McGhee 1948," fronting a band with Fats Navarro, Billy Eckstine, Jimmy Heath, Hank Jones and Ray Brown.

McGhee recorded a number of albums over the next decade, until substance abuse problems sidelined him for much of the 1950s.

He resurfaced again in the 1960s, appearing in many George Wein productions. 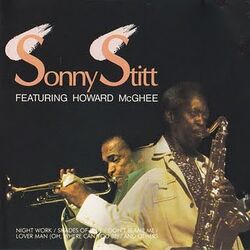 He recorded with tenor saxophonist Sonny Stitt in 1961 and again in 1967.

His career sputtered again in the mid-'60s and he did not record again until 1976.

He led one of three big jazz bands trying to succeed in New York in the late 60's, perhaps one more than New York could accommodate at the time. While the band did not survive, a recording released in the mid 1970s did.

He taught music through the 1970s, both in classrooms and at his apartment in midtown Manhattan. He instructed musicians like Charlie Rouse in music theory.

McGhee was as much an accomplished composer/arranger as he was a performer.

Howard McGhee was a legendary sideman, playing on some of the biggest recordings in BeBop.

Retrieved from "https://jaz.fandom.com/wiki/Howard_McGhee?oldid=31102"
Community content is available under CC-BY-SA unless otherwise noted.